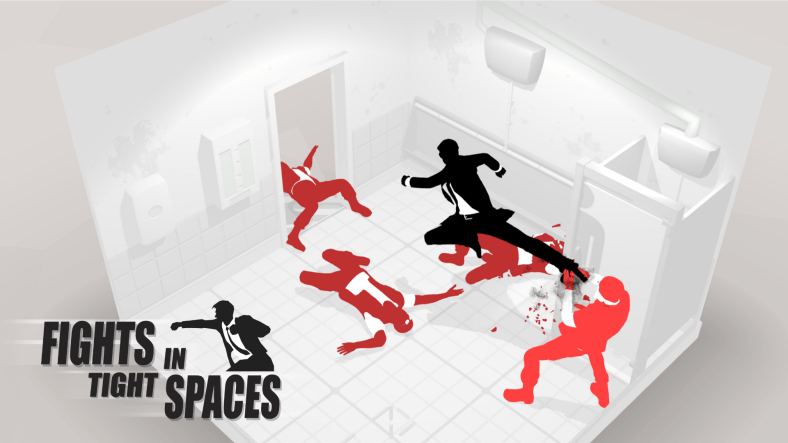 Developed by Ground Shatter and released in Mode 7, Fights in Tight Spaces is a unique new fighting game that combines melee combat and deck-building. The game also combines turn-based combat with strategic gameplay and roguelike elements, with each move determining victory or defeat. The game looks like a strange combination of Super Hot and John Wick-esque fighting games, in which hand-to-hand combat plays an important role. Combine this with deck-building and a card-based combat system, and you have a unique fighting game. Here’s our review of Fights in Tight Spaces, in which we blow up heads and sneak up behind enemies to tactically kill them.

After the instruction mission, you have the option to choose different missions and complete them one after the other. Each mission in the game has multiple levels and is in the shape of a tree where playing and completing a mission unlocks another set of missions for you on the tree. Depending on your choices, however, your path will be determined, and you won’t be able to choose missions that aren’t on your path, so you have to choose carefully. In addition to missions and battles, these trees also feature various field areas, such as a gym or medical room, where you can heal yourself, switch decks, get new skills or even upgrade the ones you already have. Again, they are procedurally generated every time you start a mission, so you can’t expect them to be in the same place every time. 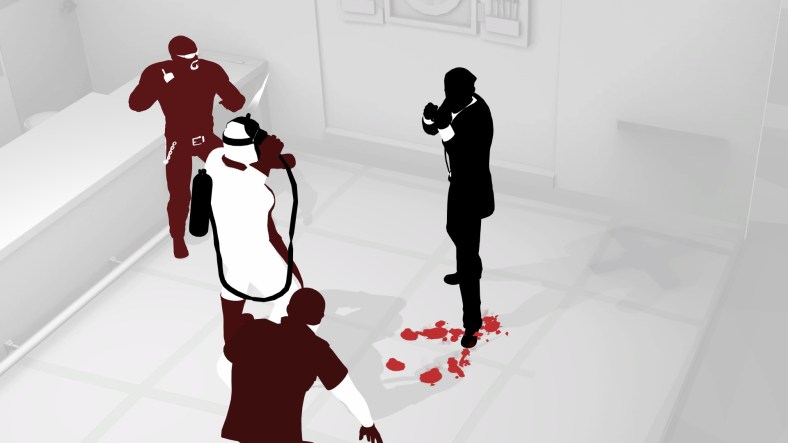 The missions roughly follow the same mission and combat criteria. There are different clans and factions that you fight with in these levels. You can follow the level tree to the end, but the game plays like a cheat, meaning that if you die in a level, your mission fails and you have to start the level tree over again. There are no checkpoints in the game, so if your character dies, the game is over for you. It’s a little annoying to restart the game, especially if you’ve already completed many levels in a mission, but it also challenges you to get better and try to use better strategies and tactics to make sure you get out of each level with as little damage as possible.

The gameplay in Fights in Tight Spaces is strictly map-based, and depending on which option you choose, you land, are on the defensive, or are ready to parry incoming attacks. These are the main categories of your cards in almost every deck. You also get combo points that are used for some of the advanced cards in the game. Most cards don’t require points though, so you can play them as long as you have movement points. If you are satisfied with your card moves and decisions, you can end your turn and allow your opponents to respond accordingly. 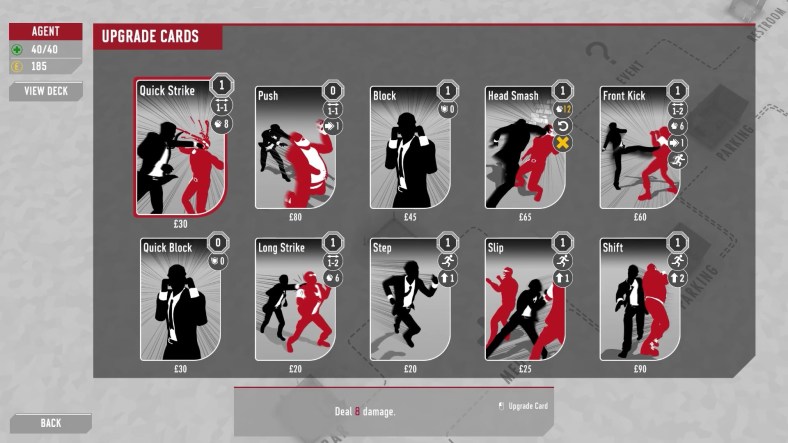 While your character is only adept at melee combat, your enemies will bring anything they want to the party. As the name implies, most battles take place indoors, and mobility is limited when multiple enemies are in view. But that’s where the deck’s unique design comes in, as certain moves allow you to sneak up on enemies, push them away, or even shoot at your own allies. With all these tactics and moves, you can kill your opponents without getting a single hit. However, these strategies can sometimes backfire because every move in the game is a gamble and you cannot be sure that the game will turn out the way you thought before you made your move.

The AI isn’t very smart, but it still makes your life miserable, especially since it’s outnumbered in some advanced scenarios. I remember playing in a very small level and there were about 4 enemies, 2 of which were heavily armored and had ranged attacks. The scenarios range from normal combat to protecting high-ranking members from enemies, and each mission presents a unique challenge for you, so you must be prepared to change your strategy at any time. You have plenty of time to think about the future, as there is no time limit to decide how to act in the future and prepare for the expected attack. 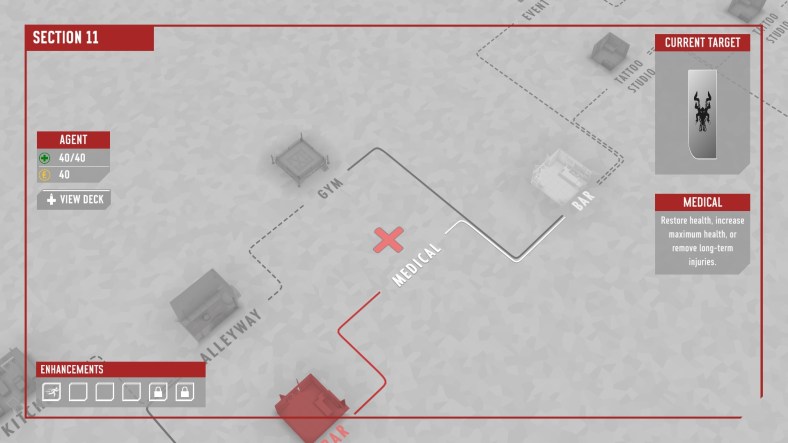 When the mission is completed, you will be given the opportunity to choose one of several maps. Your choice is permanently added to your deck and appears in your card list when you are on a mission. They add new movement types, powerful attacks, normal attacks and defense cards to the game. As you progress through the game, you unlock many new types of card blocks that allow you to choose your play style. Each deck you unlock in the game has its own unique cards and moves, but most have different names, but they generally do about the same thing, so there isn’t a huge choice of attacks and cards in the game, just different card names.

The game has a solid and cool visual design, and the fact that the map and area around you is white, while your character is black and enemies are shown in red. There aren’t many colors other than the basic black, white, and red, but sometimes the moves you choose give the character and even the enemies a different color charm when they perform their moves. Some of the later enemies in the game also bring new colors into the game. Your enemies’ punches squirt some blood here and there, and the sounds your enemies make are pretty nice too. Besides taking out enemies, you can also push them out of the level, that too. You can use different strategies to destroy your enemies. 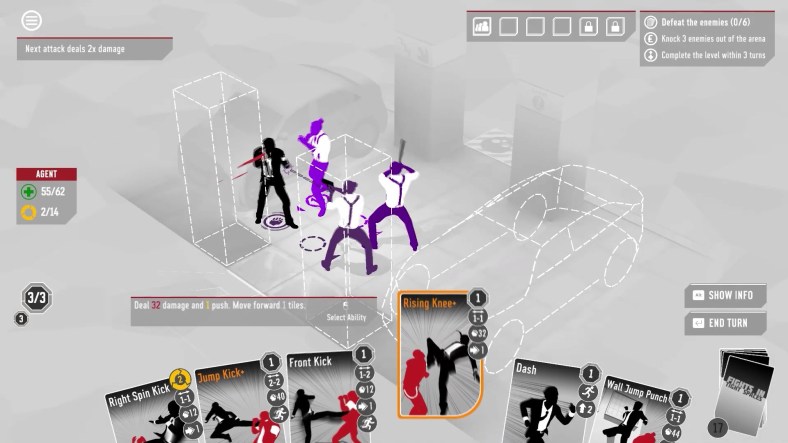 Usually the enemies, armed with rifles and other long-range weapons, shot at me from a great distance. After they captured me, I slipped behind the enemy and pushed him into place, causing the enemy to fire gunshots at his ally. With these techniques it is possible to destroy enemies without hitting them even once. However, some enemies also have the Overwatch skill, so be careful if you move as well. If you are facing an opponent with active overwatch, you will just be attacked.

Fights in Tight Spaces is a solid fighting game with strong John Wick-esque combat, but with a card combat system. As such, it will appeal to a wider audience, someone who loves action that plays like a movie, and someone who likes to build the most powerful decks and then destroy their opponents with their powerful cards. In its Early Access form, there is a lot of content to enjoy, but I don’t know if the full version will bring more missions when it comes out or not. Depending on your play style and skill with the decks, you can currently easily finish the game in 3-4 hours, including unlocking all the decks and missions.

Fights in Tight Spaces is a unique approach to how fighting games can be played as card battles. It’s a great mix of combat mechanics with card battles and deck building, and it has the potential to be a great card game if given the right attention. Even in the early access phase, the game offers a plethora of missions and level trees to play over and over again. Procedurally generated mission trees ensure that you’ll always find a unique mission every time you play. The game is still in early access, so I really hope it’s even better when it comes out. If you like fighting games that focus on melee combat and enjoy a bit of deck-building, then Fights in Tight Spaces probably won’t disappoint you, even in its Early Access form. There’s a free prologue available on Steam, so you can try it out before you decide to buy it.